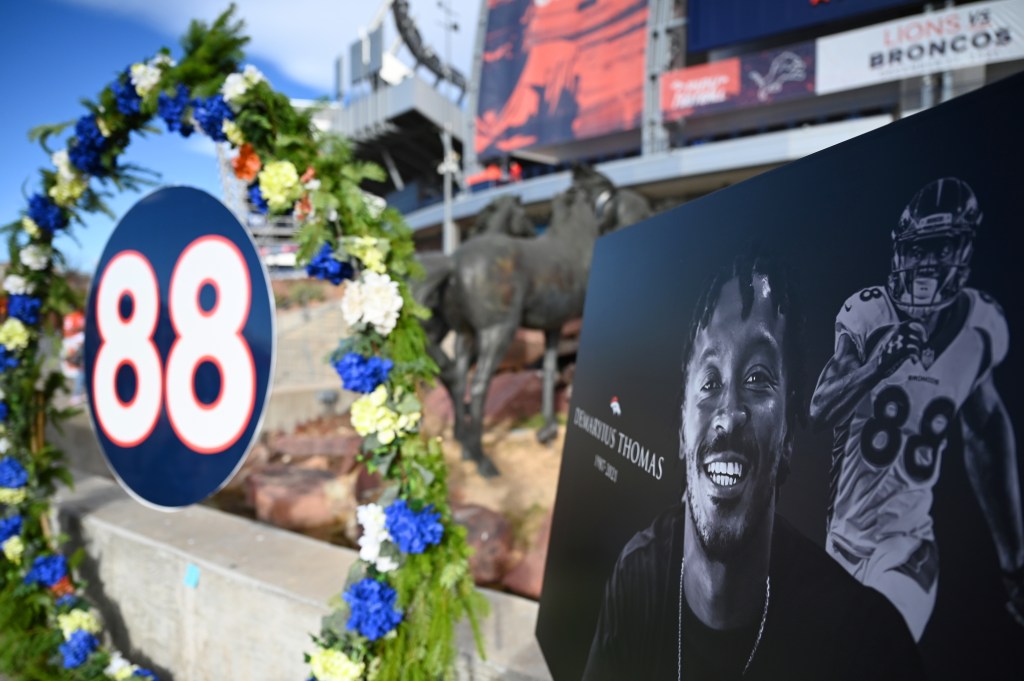 Broncos Country said goodbye to Demaryius Thomas with flowers, hats and tears. “When you lose someone like that, it’s devastating.”

It was love on first flight. Carter Shade had just been 2 years old the first time he saw Demaryius Thomas running in the light of day.

“Number 88 caught his attention and the speed at which DT ran,” Carter’s mother Caley Shade recalled Sunday at the Ring of Fame Plaza just south of Empower Field in Mile High, hours before the Broncos won’t host the Detroit Lions.

So they bought him a toddler-sized 88 Broncos jersey. When he came out of it, they upgraded to a junior version. Every time Carter saw DT, whatever DT did, he immediately tried to copy him.

“We were watching the interviews after the game,” Caley continued, “and then he was like, ‘There’s 88.’ I was always commenting on his smile, and that’s how Carter came to know him as ‘The Nice Guy”. He was always “the nice guy”.

There was no good way for a mother to break the news from Georgia late Thursday night. This “The Nice Guy”, one of the best players to ever wear a Broncos jersey, had died at the far too young age of 33.

The next morning, Caley tried anyway.

“Is he in heaven?

“So he plays football up there?”

“Yes, he will watch you play football.”

“You have to tell them,” she explained. “You really don’t have much choice.”

Caley and Carter had to stop and pay their respects to 88 on Sunday, as well as Carter’s adorable baby brother Sutton, an 8-month-old who showed up in this toddler DT jersey, the one passed down with love.

The Shades were among thousands – mothers, sons, fathers, sisters, brothers – who crowded the Ring of Fame Plaza on Sunday to donate or take photos in front of a makeshift memorial to Thomas.

On the far left of it, artist Greeley Armando Silva painted a real-time portrait of the former Broncos star, who played nine of his 10 NFL seasons – 2010-2018 – in orange and blue. On the far right, an enlarged black-and-white photo of DT smiled at mourners.

“When you lose someone like that, it’s devastating,” said Race Sullivan from Westminster, who brought a red rose, eventually placing it just to the left of Thomas’ picture.

Thornton’s John Chavez came to the memorial in an orange ’88 jersey that Thomas signed about six years earlier. An 88 jersey that he now plans to retire forever.

“It’s the last time I’ll wear it,” Chavez said. “And then I’m going to frame it and put it in my basement.”

He met DT twice. The second time was at Wesley Woodyard’s toy drive at the Denver Aquarium ahead of the 2015 season.

“Are you going to get that ring this year?” Chavez asked Thomas that day.

“It was a cool moment,” Chavez recalled. “I just sat there, talking for a while, looking eye to eye, like, feeling the passion he had for her too. And it was great.

A few yards away, Silva finished his painting, a portrait of DT pointing skyward, with around 40 minutes until kick-off.

Sunday’s draft was his seventh for the team since 2018. And the one with the shortest lead time, having only been commissioned by the Broncos last Saturday night.

“For me, (Thomas was) pretty much a few words, just gratitude and a smile,” Silva said.

These are the actions we will remember forever.

“When Sutton gets older, we’ll tell him how amazing Thomas’ soul was,” Caley said. “We are going to talk to him about his talent. That he was an incredible player who helped the community. And he’s a great angel to look up to.

When Carter Shade saw DT’s face on the jumbotron before the game, it was like seeing an old friend one last time.

With that, the little boy looked up, beyond the sun. Then he raised his right arm and beckoned to the Heavens, where the angels run fast, free and forever.