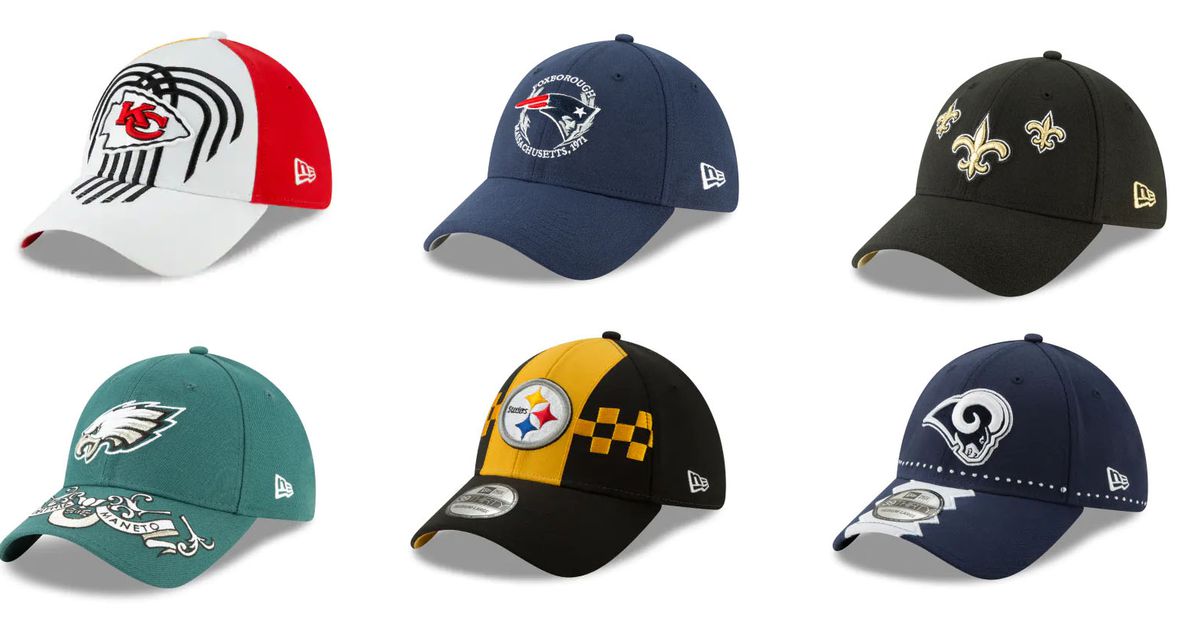 On Tuesday, New Era released their designs for the NFL Draft 2019 caps. Now, normally, I don’t really have strong feelings about wearing the head – but this is different. Rather than opting for bold looks and innovative designs, the New Era team has created 32 hats that are a healthy mix of “good”, “good” and “it’s 100% a rip-off hat you find at a truck stop”.

Let’s dive in, in draft order of course.

This hat is good. Nice standard cardinal hat with the rays to evoke the state flag. No beef with this one. I promise you they will get worse.

This is a high quality bootleg hat. One of those hats you’d see on a hastily assembled stand in a parking lot a few blocks from the stadium. It’s not bad offensively, but it’s not good either.

There is no draft cap for the Jets as they have a new logo. The hat is due out on Thursday.

I love this hat. I like it for many reasons. First, the logo on the American flag looks good. That’s not why I love him. I love this hat because with the Raiders being between California and a move to Oakland New Era, it was like “Ummmm…. America I guess?” to maintain their flag theme.

I’m conflicted over this hat. I’m pretty sure someone, somewhere thinks it’s amazing and I feel disconnected from young people. There was a strong motivation for me to overprice this hat to feel like I was in touch, but I have to be true to myself and call it ugly.

It absolutely came from a gas station.

I know you think this is going to get a bad rating, but PLOT TWIST: I love it. This hat is perfect. It’s not perfect for every team, but it’s so perfectly North Florida and matches the Jaguars’ penchant for being garish with their fashion choices. Jason Mendoza will wear one on The right place, I guarantee it.

There is nothing special about this hat. It doesn’t make me feel anything.

It’s just ugly. I know he’s trying to evoke the Buffalo city flag, but I can’t help but imagine a bison fart. I’ve never heard of a buffalo farting, but I imagine that would be thunder… like this hat.

This is what I expected every draft hat to look like. I don’t know if that’s a good thing or a bad thing.

This hat has stinky lines.

I like it because it speaks to me. It speaks to me of a time 20 years from now when this hat is in every home in Wisconsin, sweat stained, fading green from years of mowing the grass. It’s rather beautiful, and also stinky. Because old hats smell like ass.

They have palm trees in Miami. We understood. It would have been better without the tree.

Fools. You damn fools. Why the hell would you bring up the flag of Georgia, which was based on the first design of the Confederate flag, when the flag of the city of Atlanta IS A BURNING BIRD OF JUSTICE!

Give this a low rating on principle. The hat is anything. Missed opportunity.

This hat is good.

Oh God it’s ugly. This is one of the worst hats I have ever seen, no matter the time or place. I know they wanted to do the whole “two states, one team” thing, but God, that’s awful. Looks like a patchwork quilt and gas station bathroom had a baby. I hate that.

No. 17 — [The Browns traded this pick so we’re grading them here]

I love that the Browns have the Ohio State flag while the Bengals have stinky lines.

Looks like someone’s mom bought an embroidery machine for Christmas and decided to “jazz up” a Vikings hat. Which honestly is good enough compared to some of these hats not to be totally roasted.

The hat is fine, but I can’t help but imagine that extending the brim color on the cap itself will make people look like they have mico-heads.

Oh, the number 12. How original. I certainly haven’t seen this 20 million times before.

Still better than 90% of hats.

Maryland has one of the coolest and most iconic flags in the country and this was just a ho-hum representation of it. Wraps around the hat. It still doesn’t excite me.

I’m going to cut New Era some slack here. It’s hard to work with the Texas flag when the Texans logo itself is apparently just the Texas flag. That hat still annoys me, though.

There is almost nothing to this hat. Some stars you can’t see and that’s about it. It makes this hat good.

Is there a law that all Colts products have to look boring? In any case, I like the horseshoe on the white background. Very good with that. Looks like a roundabout.

I hate to praise the Cowboys, but here we are. I like this hat. There’s no doubt that the Cowboys have some of the coolest colors in the league and the reimagined Texas flag in them is actually pretty awesome. Good hat.

I know it’s the city flag, but I have to anchor dots to remember driving on a busy highway.

No. 30 — [New Orleans traded this pick, so they’re being graded here]